The Psychology Behind Sibling Rivalry 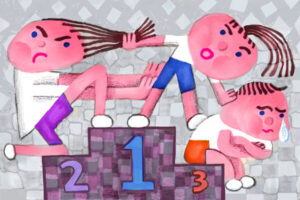 My 4- and 8-year-old are closer now than they were before the pandemic — I hear the sounds of giggling wafting from their bedroom several times a night. But the more time my girls spend together, the more they fight, too.

The most common battlegrounds for my kids are perceived injustices and jockeying for position. The most absurd instance of the latter was when we were waiting to get flu shots this past fall. The girls got into a brawl over who received the first shot. My older daughter “won” that argument, but it was only as she was walking toward the pharmacist’s door that she realized a shot was not actually a prize.

On days when we are trapped in the house together and their screaming matches reach operatic levels, their dad and I worry we did something horribly wrong as parents to encourage this volume of strife. But according to Jeanine Vivona, a professor of psychology at The College of New Jersey who has studied sibling rivalry, “competition with siblings is just a fact of life. And we, as people with siblings and people with children, can just try to manage it as best we can.”

Observational studies have shown that sibling conflict may happen up to eight times an hour. Other research finds that pairs of sisters tend to be the closest, and that sibling dyads that include a brother have the most conflict. “Conflict does decrease into adolescence; it sort of levels off,” said Mark Ethan Feinberg, a research professor of health and human development at Pennsylvania State University. “Early and middle childhood are particularly difficult times for sibling aggression.”

As a study that Feinberg co-authored notes, the book of Genesis, which includes the “founding stories of the Western psyche,” is dripping with tales of murderous and covetous siblings, like Cain and Abel and Jacob and Esau. And these stories unfurl “themes researchers are exploring today: dastardly deeds, conflict over parental love and resources, and triangulation of children into parental conflicts.”

Sibling rivalry is so profound that hundreds of years ago, when child mortality was much higher, children under 5 with close-in-age siblings were more likely to die. These deaths were likely “related to increased prevalence of childhood infectious disease in such households, and lower levels of maternal nutrition, and perhaps more general competition for parental attention,” said Sarah Walters, an associate professor of demography at the London School of Hygiene and Tropical Medicine and the co-author of a study on siblings and mortality clustering in 19th-century Belgium. This knowledge certainly puts my kids’ fights over who got more ice cream into perspective.

While most siblings aren’t fighting for actual scraps, psychologically, sibling rivalry serves a developmental purpose: It helps children figure out what is unique and special about themselves, otherwise known as “differentiation.” Children want to be seen as the most special by their parents, so they’re “always going to push for preferential treatment,” over their siblings, Vivona said. But they may also shape their interests and personalities around their siblings’ skills and desires.

For example, let’s say the older son is a soccer star. The younger child or children may then avoid soccer altogether, either because they are afraid they won’t be as good or because they fear they might be better — and they don’t want to take that risk either, Vivona said. Or perhaps they both end up on the soccer team, but the older one is the serious hard worker, and the younger one tries to establish himself as the team jester.

Just because sibling rivalry is to be expected does not mean there aren’t ways to mitigate it. Here are five suggestions from the experts to handle squabbling sibs.

Figure out what sets them off. “Pay attention to what tends to happen before conflict breaks out,” said Sally Beville Hunter, a clinical associate professor in child and family studies at the University of Tennessee, Knoxville. If your kids fight every time they play video games, for example, make sure you’re in earshot when they sit down to play. Listen for the particular words or tones of voice they are using that are combative, and try to intervene before it escalates.

Help them learn to resolve conflict. Once tempers have settled, try to sit your kids down and discuss the problem “without blaming or accusing,” Feinberg advised. Give each kid a chance to talk, uninterrupted, and have them try to come up with solutions to the problem themselves. By the time kids are elementary-school age, they can “evaluate which of those solutions are win-win solutions and which ones are most likely to work and satisfy each other over time,” he said. They should also learn to revisit problems when solutions are no longer working.

Praise them in public and punish them in private. If your kids are being kind to each other, “praise really loudly all over the place,” Hunter said. For example, “I love that you let your sister go first!” But if you’re criticizing them, try to do it outside of the other child’s earshot, because she may use it as ammunition. Our older daughter will take every opportunity to boss her little sister around (“Remember, Mom said you couldn’t jump off the couch!”), so I took this bit of advice to heart.

Try to find moments where everyone can come together. Your kids’ temperaments and personalities may be similar, or they may not. They may both love dance, or one loves dance and the other just wants to play chess. One might be rigid, and the other is a free spirit. “Try to find common activities that allow everyone to be flexible, and to feel connected,” Vivona said.

I gave the example of our family movie night as one of the family activities we do regularly as a group, but told Vivona that it usually takes an absurdly long time to decide on a movie because of all the arguing. “The fact that it takes a long time should not take away from the fact that it’s something valuable,” she said. “You’re going to experience the rivalry — there’s no short-circuiting it.” But at the end, we all sit together and keep each other company and eat popcorn, and our kids are learning valuable skills, like compromise, even if we’re just watching “Toy Story” for the 15th time.

A Covid-specific note. “We are all spending more time with each other indoors, especially in the winter,” Hunter said. “I think some of these conflicts can be really solved by telling our kids to go outside and run around the house.” They may get twitchy when they’re cooped up, so throwing some physical activity into the mix — even if it’s an indoor obstacle course made with couch pillows — can change the mood.