Children are like wet cement. Everything that falls on them leaves an impression. 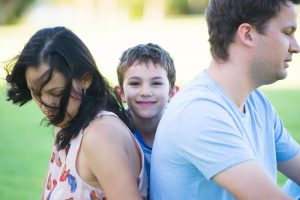 Historically, more divorce filings occur in January than in any other month, with a New Year’s resolution to “start a new life,” which is why January is the International Child-Centered Divorce Awareness Month. It is a month dedicated to educating parents worldwide about avoiding the harm they may unknowingly inflict on their children when they pursue non-peaceful divorce processes.

When parents divorce, how does it affect their children? It depends.

Divorcing parents are likely unaware that 31 years ago, world leaders made a historic commitment to the children of the world when they adopted the United Nations Convention on the Right of the Child – an international agreement about childhood. By the end of 2015, 196 countries had ratified the Convention. Of significance for divorcing parents is the below article from the Convention, which states:

1. Parties shall assure to the child who is capable of forming his or her own views the right to express those views freely in all matters affecting the child, the views of the child being given due weight in accordance with the age and maturity of the child.

2. For this purpose, the child shall in particular be provided the opportunity to be heard in any judicial and administrative proceedings affecting the child, either directly, or through a representative or an appropriate body, in a manner consistent with the procedural rules of national law.

Yet, the voices of most children of divorcing parents are unheard. For decades, the research about children and divorce has found that children report that the news of their parents impending divorce and how their parents divorced made a lasting impression on them, even into their adulthood. Most parents want to prevent emotional and psychological damage to their children during and after divorce but often do not know how to do so.

Divorce is the number one stressor for adults, second only to the death of a loved one. So, it is not surprising that divorcing parents find it challenging to be their highest and best selves for their children’s sake and effectively parent their children.

Research indicates that the number one predictor of children’s maladjustment during and after divorce is the level of conflict between their parents. When parents cannot model an amicable relationship with each other, are angry with each other, and engaged in the “battle” of divorce, their children are caught in the middle, drawn into taking sides, and they suffer. Children cannot deal with these adult situations and cannot process the overwhelming emotions that arise in a “win-lose” divorce.

How do parents become their highest, best selves during such stressful times?

Children are the real wealth of the family. For more than two decades, I have educated parents about a child-centered, out of court divorce process called Collaborative Divorce. Parents learn how to work together, not fight against each other. They learn how to keep their children in the center, not in the middle of their divorce. They understand the importance of their children feeling safe and secure to love both parents. And they learn that respectful coparenting with effective communication skills avoids the common mistakes that can scar their minor and adult children.

How can parents help their children during this family upheaval?

Collaborative Divorce professional teams include a Neutral Child Specialist, who is the voice of the children. Research indicates that when children have a voice in their parents’ divorce process and can talk with a neutral professional who listens to them and educates them about this difficult family transition they are experiencing, the children are better adjusted, the parents are better adjusted, and the parents’ agreements are more durable. Collaborative Divorce is a win-win for parents and, most importantly, for their children.

Have questions or want to learn more about Collaborative Divorce?

FacebookTwitterRedditLinkedInWhatsAppTumblrPinterestEmail
Page load link
By continuing to browse the site you are agreeing to our use of cookies.
CONTACT US
Go to Top